Last month, I went on my first trip to Los Angeles. And I thought New York City was crazy… ha! The band and I stayed at a cool hotel in Venice Beach, which seems to be a gathering area for all the world’s greatest nuts. “Green doctors”, stripper dogs, possessed street artists, manic bums, Kens and Barbies on rollerblades, dirty hippies, horrifyingly pierced and tatooed aliens… It’s like Ripley’s Believe it or Not is going on 24/7 in front of your very eyes. Quite entertaining actually.

I was invited by Tucker Gates, director of A&E’s drama series Bates Motel, to sing for his lovely wife’s birthday party. She is obsessed with vintage French jazz and we had a marvelous audience in their beautiful home on the hill, it was a lot of fun. They even had bottles of absinth from the small town where I was born, what a surprise! After the show, we drove around for an hour trying to find the darn Hollywood sign which kept eluding us. We never found it. 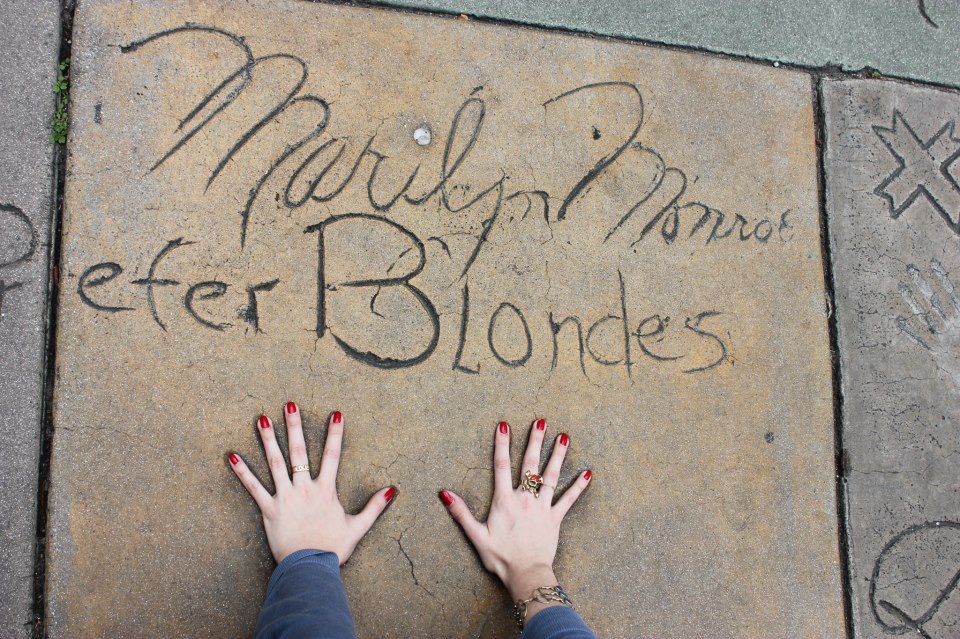 I stayed a few days longer to visit my dear West Coast cousin Corina and do the LA tourist traps of course. I was actually very moved to go see all my idols’ hand and footprints at the Chinese Theatre… Jimmy Stewart, Judy Garland, Eddy Cantor, Maurice Chevalier, Dick Van Dyke, Rita Hayworth… and I totally freaked when I discovered Marilyn Monroe’s handprints were exactly the same as mine. Chills seriously ran up and down my spine.

I also had the opportunity to jam with Los Angeles Gypsy jazz band the Black Market Trust and listen to awesome violinist and singer Leah Zeger. I ended my cool trip on the West Coast with Disneyland, of course, and that was spectacular obviously. I can’t wait to be back!